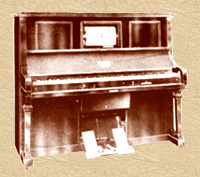 ALBRET WEBER, founder of the Weber piano, is a fine musician and skilled craftsman.Born in Bavaria in 1828, Albert Weber was early acknowledged a musical genius. At the age of sixteen he had attained a notable place among the musicians of his country. Young Weber felt keenly the limitations placed upon his art by the inadequacy of existing instruments. He envisaged the possibilities of a great career in the building of really fine musical instruments. To learn the technique of construction he entered the service of Holden, a master piano builder of that day, and later he was associated with Van Winkle, another celebrated piano maker. It soon developed that Albert Weber combined to an extraordinary degree the qualities of artist and artisan. And when the artist-artisan combination is that of a pianist and piano maker as well as the art of piano playing and the science of piano making, it must benefit him materially.

In 1852, the American pianist Albert Weber manufactured the Weber piano for the first time. Subsequent to Franz Liszt, the celebrated Hungarian composer and pianist, the great Poland Piano master Ignaz Paderewski started to use the Weber piano, along with the rise of his reputation, the “Weber piano” had won global reputation and gradually become the favorite brands for the European and American pianists.

Weber had been selected as the first choice piano of the European royal family such as Spanish king Alphoneso XIII, H.M.George V of Britain, Gustaf Adolf princess of Sweden, etc. It also enjoyed a high reputation worldwide because it was the piano which had been recognized by the father of waltz Johann Strauss. The famous tuning master of world level Terry Walsh (Stanwyck professional tuning engineer) and the pianists unanimously had this to praise: “product with excellent action which can stimulate the hand feeling of pianists”, and “ in terms of tone-quality, it not only renders proper relaxation and tension, but also maintains clear tone color. In terms of instant break-out force, it also can be called the best piano in the world.” 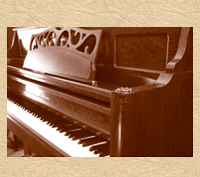 In creating his new instrument, Albert Weber made a transformation in the existing methods of piano manufacture. He built into his piano what he was always proud to call His strong personal magnetism and unbounded enthusiasm were so reflected in the spirit of his craftsmen that they became almost as exacting as Weber himself. Under his influence machine-like workers were changed into craftsmen and piano building was lifted into the realm of art.

Early in 1987, young chang instrument of Korea purchased the brand of Weber, beginning to produce in the head office Inchon, and exported all of the Weber pianos to every corner of the world. Till now, it is the first time that this high-end brand is launched in domestic China.